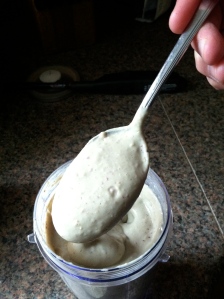 I have been enjoying a healthy version on pistachio pudding!

Here’s how I figured this out:

A couple months back my husband started using Visalus protein powder supplement that is delivered to your door.  The plan was much like the old Slim-Fast routine:  a shake in the morning, a shake at lunch and reasonable supper of your own choice.  At Christmas, we received a one serve blender set, so, we were off and running!

He also found a smoothie recipe around that time that was supposed to help with sleeping that used soymilk, a banana, frozen tart cherries and peach slices and a touch of vanilla.  ( We have found that if you use enough frozen stuff it will be thick and can supplement that ice cream craving that can be hard to crack.)

I have gotten used to grabbing lots of bananas going through the grocery store to make sure he had his smoothie supplies every morning.

Well, last week, I happened upon a batch of perfectly ripe avocados on sale, and thought voila’!  From my past knowledge of raw foods, I realized I could substitute the avocado for the banana for creaminess!

…Now I haven’t got him to try it yet… probably the green color, but then again, I am usually the more adventurous one in trying foodstuffs, but I’ve sure been enjoying it.  : – ) I am more of an experimental cook… Much to my family’s chagrin.  LOL

I experimented first with using the avocado instead of the banana in our recipe.  It was definitely a smoother texture.  Then I realized I was some cocoa powder and a little more vanilla away from chocolate pudding!!!  (Raw, The Uncook Book, by Juliano Brotman)

So I tried it.  Yep, pretty good!  It took at least a whole mounded teaspoon to cover up the avocado taste, but with PMS and stress – chocolate was good!  … I’m not normally a chocolate person, but I think I am over my need for my chocolate, caffeine rush, for now.

– Then I realized I had some left over coconut flakes in the freezer from holiday baking, and some raw almonds we hadn’t gotten around to eating, ought to elevate the nutrition quotient!  Subtract the cocoa and add the above ingredients and Blender Pistachio Pudding!!!  YUM!!

I suggest you play with the different amounts of ingredients.  I’ve been using almond/coconut milk instead of soy.  Working on balancing the hormones…

Try it. I’ll bet you’ll like it… and get your “veggies” too!